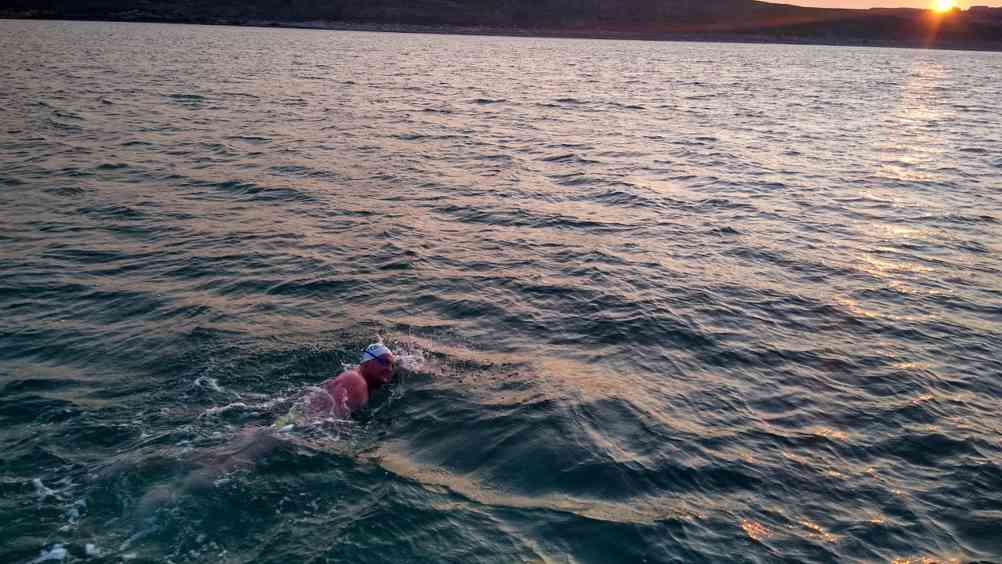 After an anxious wait, Jim received the call to tell him that conditions would be right for him to attempt the epic swim at 7.30pm on Sunday, September 13. Accompanied by his support team and pilot boat High Hopes, Jim overcame a wave of challenges and swam through the night before reaching a remote beach near Calais in 11 hours and 53 minutes.

“I’d only ever swam for six hours before, so I was very nervous before setting off,” he said. “The sea temperature was about 18 degrees which was okay but in the first hour I faced the roughest seas I’d ever swam in. It was very choppy, and I swallowed a lot of salt water.

“It soon became more of a mental challenge than a physical one. I did consider getting out after three hours, but I knew there was nothing wrong with me and I had to keep going.”

Every 45 minutes Jim stopped to take on food and liquids while treading water, before ploughing on through the waves. “It takes a long time before France appears to be any closer which was incredibly frustrating, but it was a clear night and swimming under the stars was pretty special.”

About half an hour from France, Jim was stung on the face by a jellyfish and hidden rocks made his final few metres a perilous challenge.

“I was pretty wobbly as I got out,” he said. “I’d been pulled so far by the currents that I missed Cap Gris Nez, which is the closest point to England, and ended up on a tiny beach where I was greeted by a French couple who’d been tracking my progress.”

Jim is only the 32nd swimmer to complete a solo crossing of the Channel this year and the 2143rd person to achieve the feat since Matthew Webb first swam from Dover to Calais in 1875.

“I’m quietly proud,” he admitted. “My brother Ben is a proper swimmer – he reached the finals of the Commonwealth Games – and having him on the boat as part of my team really kept me going.”

Jim’s amazing swim has so far raised £6904 for Dentaid which will help the charity restart its work providing outreach dental care for homeless and vulnerable people on two mobile units.

“The support I’ve had has been amazing,” he said. “People were tracking my progress through the night and sending such wonderful messages of support. I was touched by the kindness of strangers and want to thank everyone who sponsored me.”

Jim, who works as a dentolegal consultant for Dental Protection and at Orgreave Dental Surgery in Sheffield, is slowly recovering from his swim.

“There’s aching muscles,” he said. “But it was absolutely worth it.”

You can still sponsor Jim’s Channel swim by visiting https://uk.virginmoneygiving.com/JimLafferty2