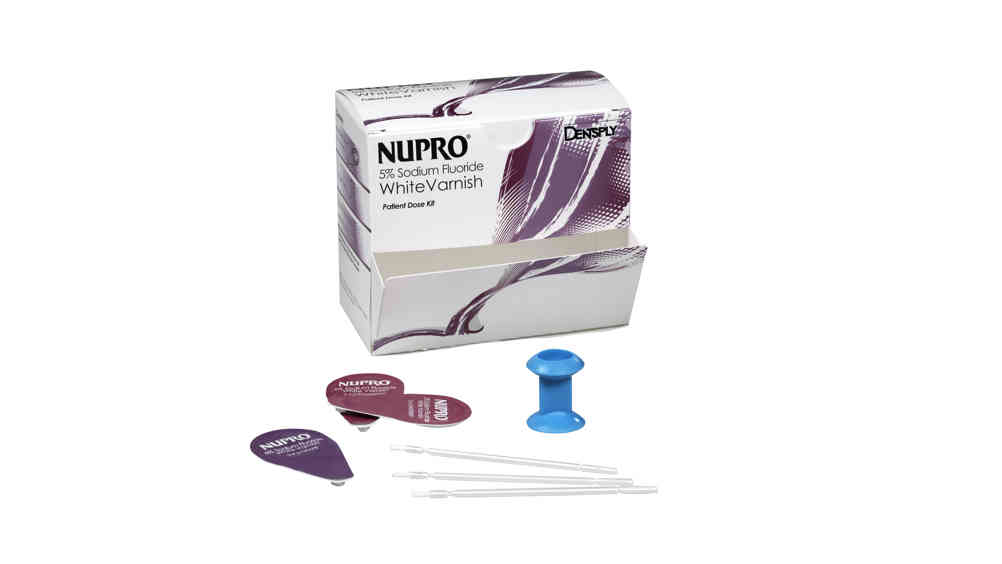 The aim of this article is to describe how a group of practice–based researchers, the PREP Panel, considered the handling of Dentsply Sirona Nupro White Varnish.

A questionnaire was developed jointly by the PREP Panel co-ordinators and members of the Dentsply Sirona team, this being designed to assess the respondents’ opinions on the presentation of the varnish, its ease of use and other aspects, such as flavour.

All 33 members of the practice-based research group, the PREP Panel, were sent an email asking if they would be willing to evaluate a new fluoride varnish. Of those who responded in the affirmative, 13 general dental practitioner members of the PREP Panel were selected at random, three of whom were female. Their average time since graduation was 27 years, with a range of 13 to 38 years.

Explanatory letters, questionnaires and two packs of 50 Nupro White Varnish sachets (one of each flavour) were distributed to evaluators in February 2017. The practitioners were asked to use the materials as indicated and return the questionnaires after 10 weeks. Questionnaires were completed by 10 GDPs and 12 hygienists.

Regarding the number of applications placed by the evaluators in a typical week, eight (36 per cent) used less than five applications, eight (36 per cent) used five to 10, while five (23 per cent) used more than 10. The fluoride varnishes used by evaluators prior to the evaluation were: Duraphat (16 evaluators), Voco Bifluorid (five evaluators), Flairesse (two evaluators) and 3M Clinpro White Varnish (one evaluator). Two evaluators used more than one material. The main reasons for the use of these materials were “good results”, “ease of use”, “patient acceptance”, and, “provided by the practice”. Other reasons given were “cost”, and “not aware of alternatives”. The main perceived disadvantages of the varnish used prior to the present evaluation were stated to be the colour and taste. Other disadvantages were stated to be non-adherence to wet surfaces, messy and poor infection control when dispensed from a tube and limited efficacy.

When the evaluators were asked to rate the ease of use of their current varnish, the result was:

Seventeen (92 per cent) of the evaluators stated that patients made comments about the taste or smell of their current varnish, with nine reporting negative comments.

Twelve of the evaluators (55 per cent) stated that they knew the percentage of fluoride concentration of their current varnish. Answers given were 50mg/ml (three evaluators), 2.2 per cent (eight), and five per cent (one evaluator). One evaluator stated 50 per cent with no elaboration as to how that percentage was arrived at.

Evaluators rated the presentation of the kit as follows:

No comments were made suggesting improvement to the presentation. Comments made included, “Some wastage due to individual packaging”.

When the evaluators were asked to rate the instructions for Nupro White Varnish, the result was:

Comments made included: “Add more colour and include reasons for use”, and, “Clarify if OK to use on asthmatic patients (Duraphat is contra-indicated)”.

The total number of applications made during the evaluation was 324. Twenty (91 per cent) of the evaluators stated that they were satisfied with Nupro White Varnish for the treatment of dentinal hypersensitivity. Sixteen evaluators (73 per cent) did not encounter any adverse comments from patients in regard to the taste and smell of Nupro White Varnish. Comments made included: “Patients liked taste”, “Grape flavour not like grapes!”, “Both flavours liked”, “A few didn’t like the grape flavour”. Three evaluators (14 per cent) noted a preference for the raspberry flavour of Nupro White Varnish. Positive comments made by patients were noted by 17 evaluators (77 per cent) and included: “Hypersensitivity settled after one application”, “Clear colour less obvious than Duraphat” (three comments), “Like taste” (eight comments), and “Both flavours great”.

The evaluators rated the ease of use of Nupro White Varnish as follows:

In respect of the viscosity of the material, the evaluators rated it as follows:

All (n=22) of the evaluators stated that the working time of Nupro White Varnish was sufficient.

Twenty (91 per cent) of the evaluators felt that the clear colour of Nupro White Varnish was an advantage compared to some other varnishes.

The application of Nupro White Varnish on wet teeth was rated (in comparison with the previously used varnish) as “Worse” by two evaluators (nine per cent), “Better” by 11 evaluators (50 per cent), “The same” by eight evaluators (36 per cent), with no response from one. Comments made included: “Less adherent to wet surfaces than Duraphat”, and, “Seems better to dry the tooth” (two similar comments).

Other comments included: “Brilliant on wet surfaces, liked flavours, good results with hypersentivity”, “A pleasure to use – hygienists liked it – will be using it in future”, “I liked this product. Fun for children and nice appearance – only concern is cost”, “Big disadvantage is no eating for two hours after application” (two evaluators), “Wastage per application is an issue but good to use in a wet environment and patients liked taste”, “It would be useful to have an option to self-dispense from a tube”, “Liked the packaging – hygienic and good flavours”

Dentsply Sirona Nupro White Varnish has been subjected to an extensive evaluation in clinical practice by members of the PREP panel, in which over 324 applications were made by evaluators, who included 10 GDPs and 12 hygienists. Based on this the following conclusions may be made:

Nupro White Varnish scored an excellent 4.8 for ease of use compared with 4.5 (on a VAS where one represented difficult to use and five easy to use) for the previously used fluoride varnish.

The evaluators scored the viscosity of Nupro White Varnish close to the ideal median score of 3 (2.9 on VAS where one was not viscous enough and five too viscous).

Sixteen evaluators (73 per cent) did not encounter any adverse comments from patients in regard to the taste and smell of Nupro White Varnish. No clear preference regarding flavour was reported by the majority of evaluators, but the grape flavour tended to be the only flavour attracting a few negative comments.

Positive comments by patients, regarding taste, smell and efficacy were reported by 77 per cent of the evaluators.

The excellent reception of this new fluoride varnish material is underlined by the high scores achieved in all criteria, with 82 per cent (n=18) of evaluators being either “extremely likely” or “very likely” to recommend the new system to colleagues, and 91 per cent of evaluators stating that they would purchase Dentsply Sirona Nupro White Varnish. Twenty (91 per cent) of the evaluators also felt the clear colour of Nupro White Varnish was an advantage compared to some other varnishes.

The authors thank the members of the PREP Panel for completing the feedback forms and thank Dentsply Sirona for providing the material and funding this evaluation.

The authors do not have any financial interest in the company whose material was included in this study.

Dentsply Sirona wish to thank the PREP Panel for their comments regarding our recently introduced Nupro White Varnish. We are delighted with the good reception that this product received.

Nupro White Varnish is a uniquely formulated varnish for hypersensitivity relief and delivers rapid fluoride release (compared to competitive varnishes). It may be applied to wet tooth surfaces to save time and effort and, with a two hour wear-time, requires half the wear-time compared to competitve varnishes so patients can quickly resume normal eating and drinking. Nupro White Varnish offers easy handling, as it is formulated to minimise clumping, with no dripping or stringing, and is available in grape and raspberry flavors. It is packaged in a single-use dose to avoid cross contamination, and is contraindicated for use with patients with bronchial asthma.