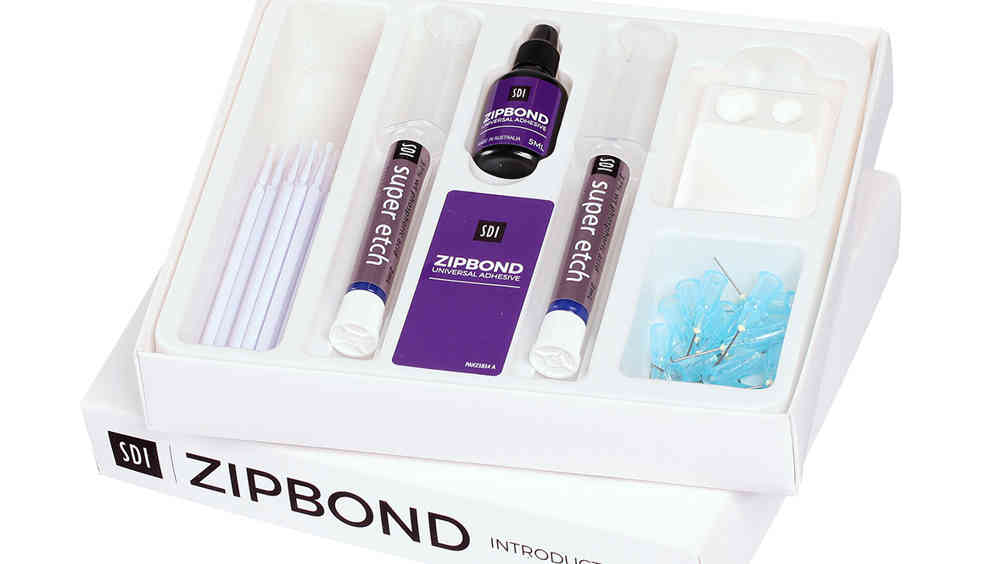 Trevor Burke and Russell Crisp present a clinical evaluation of SDI Zipbond by the PREP Panel.

Dental clinicians need adhesive materials, as these facilitate minimally invasive class II cavity preparations, the use of resin-based tooth coloured restorative materials (which are increasingly requested by patients), non-preparation cervical restorations, the build-up of fractured or worn anterior and posterior teeth, notwithstanding indirect techniques such as resin-retained bridges or where there is a short clinical crown for full or partial coverage restorations.

Dental clinicians need adhesive materials, as these facilitate minimally invasive class II cavity preparations, the use of resin-based tooth coloured restorative materials (which are increasingly requested by patients), non-preparation cervical restorations, the build-up of fractured or worn anterior and posterior teeth, notwithstanding indirect techniques such as resin-retained bridges or where there is a short clinical crown for full or partial coverage restorations. Furthermore, in the present era of the coronavirus pandemic, direct-placement adhesive dentistry may often be carried out without the use of an aerosol-generating turbine handpiece, which will reduce surgery turnaround time between patients.

It is therefore the purpose of this paper to examine the clinical handling of a recently released universal bonding agent, Zipbond, manufactured by SDI.

Members of the PREP Panel were contacted in September 2019 regarding their participation in a new handling evaluation. Of those who expressed an interest in taking part in the evaluation, nine members were selected. A questionnaire was designed jointly by the PREP Panel co-ordinators and the sponsors of the project, SDI, with the objective to assess the respondents’ views on the handling and ease of use of the material. Explanatory letters, questionnaires and packs of the SDI Zipbond, in both single unit dose and bottle presentations, were distributed in mid-January 2020. The practitioners were asked to use the material for 10 weeks and return the questionnaire.

Of the nine members selected from the PREP panel, two were female, and the average time since graduation was 27 years, with a range of 24 to 33 years.

All the evaluators currently used a dentine/enamel bonding system, with a variety of systems being used. Reasons for the choice of these materials were, primarily, ease of use and good results. Other reasons were manufacturer’s reputation, previous PREP Panel evaluation, familiarity and “issued by employer.” One evaluator used more than one system.

When the evaluators were asked to rate the ease of use of the bonding system used prior to the evaluation, the result was as follows:

The evaluators were asked how many dentine-bonded restorations they placed in a typical week with five placing between 16 and 20, three placing 10 to 15 and one placing more than 20.

67 per cent (n=6) of the evaluators stated that they would not be prepared to pay extra for the convenience of single-unit doses.

System ease of use

The evaluators rated the presentation as follows:

When the evaluators were asked to rate the instructions, the result was as follows:

The bottle dispenser was stated to be easy to use by all (100 per cent) of the evaluators.

The cleanliness and ease of cleaning the bottle was rated as follows:

The ease of use of the single dose presentation of Zipbond was rated as follows:

When the evaluators were asked if the amount in the single dose was satisfactory, all evaluators (100 per cent) stated that it was. One comment was made:

A total of 593 restorations were placed using Zipbond, comprised as follows:

When the evaluators were asked if they used Zipbond for any other applications the result was as follows:

Other uses were stated to be “for bonding orthodontic retainers.”

The evaluators stated that in percentage terms, the mode of application of SDI Zipbond was as follows:

When the evaluators were asked to rate their and their dental nurses’ assessment of the dispensing and handling of SDI Zipbond, the result was as follows:

The viscosity of the bonding liquid was rated by the evaluators as follows:

Too thin Too viscous

89 per cent of the evaluators (n=8) stated that the SDI Zipbond liquid stayed in place when placed on the tooth surface. All of these eight evaluators stated this was an advantage over other bonding adhesives

The one-component aspect of SDI Zipbond was stated to be an advantage over other systems by 100 per cent of the evaluators. With regard to time taken for placement of the bond, 56 per cent (n=5) stated that SDI Zipbond was the same to use as other bonding systems they had used, three evaluators (33 per cent) stated it was faster and the remaining evaluator stated it slower.

No evaluators reported any instances of post-operative sensitivity.

All (n=9) of the evaluators stated that they would purchase SDI Zipbond if available at average price.

When they were asked if there were any changes the considered essential to the acceptability of the material the following comments were made:

When the evaluators were asked to rate the ease of use of SDI Zipbond, the result was as follows:

The SDI Zipbond universal bonding system has been subjected to an extensive evaluation in clinical practice by members of the PREP panel, in which 593 restorations were placed. These creditable numbers were achieved despite around two weeks of the 10-week evaluation period being lost because of the closure of UK dental practices due to the Covid-19 pandemic. It was interesting to note the high dependence on adhesive techniques reported by the evaluators, which will stand them in good stead in their return to work in the new norm of reduced or no-aerosol dental practice. It was also interesting to note that 78 per cent of the evaluators preferred the bottle version of the material over the unidose presentation. It might be considered that this was due to environmental concerns over disposing of a plastic container after use of the individual dose of material, but it appears that they were not prepared to pay extra for the convenience of single-unit doses. Other aspects of the evaluation worth highlighting are:

The good reception of SDI Zipbond was clear from the high scores achieved and the fact that all of the evaluators would purchase the material if available at average cost.

We are grateful to the responding evaluators for their help with this project, and in managing to return the questionnaires in the current difficult situation for dental practices in the UK. Thanks are also due to SDI for financial support for this evaluation.